He was one of senior student aikido founder O Sensei Morihei Ueshiba’s. Shioda was born on the 9th of September 1915 in Tokyo.
His father was Seiichi Shioda, a physician who also taught judo and kendo.
While still at school, Shioda trained in judo, attaining the rank of 3rd dan before completing secondary school. He also trained in kendo during his youth. 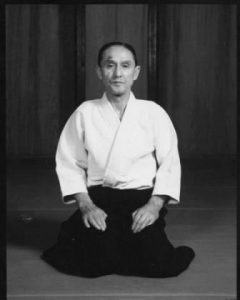 Shioda began training under the founder of aikido, Morihei Ueshiba, in 1932. His training as an uchideshi under O Sensei continued for eight years.
Shioda graduated from Takushoku University.
In 1941 he was posted to administrative positions in China, Taiwan, and Borneo during the Second World War.
Shioda returned to Japan in 1946. He rejoined Ueshiba for a month of intensive training, but was forced to dedicate the next few years to earning a living in post-war Japan.
He began teaching aikido in 1950. In 1954, he entered the All Japan Kobudo demonstration, and won the prize for the most outstanding demonstration.
In 1955, Shioda founded the Yoshinkan style of aikido, which emphasizes self-defense applications. The name “Yoshinkan” was the name Shioda’s father had used for his own judo dojo.

In 1957, Shioda developed the Senshusei course, an intensive aikido training program.
In 1961, O Sensei promoted Shioda to the rank of 9th dan.
In 1990, together with his son Yasuhisa Shioda, he established the International Yoshinkan Aikido Federation. That same year, he established the international Senshusei program to develop Yoshinkan Aikido instructors across the world.
He wrote a few books on his martial art:
Dynamic Aikido (1968, published in paperback format in 1977). Total Aikido: The master course (1997, co-authored, published posthumously).
Aikido Shugyo: Harmony in confrontation (2002, published posthumously)
Gozo Shioda Kancho died on July 17, 1994.

Kiyoyuki Terada 20.03.1922 – 13.07.2009. He was Aikido teacher. He was ranked 10th Dan in Yoshinkan Aikido. His Budo life began in April 1934 at Kaisei Junior High School where he took up his first martial art of Kendo. At age 15, he received an award for the best Judo player of the year after winning a Judo championship that same year.
Upon his entry into Takushoku University at age 18, he began his karate training. In 1941 he met Gozo Shioda. During the period between 1940 and 1943, Terada learned Sumo, Judo, and Kashimaryu Jujitsu. 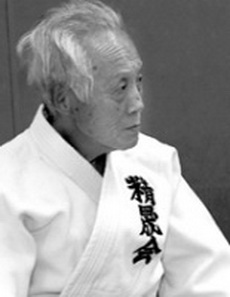 Terada moved to Tokyo in 1948 and worked for the Miyakoshi Company. In 1950 he went to work for the military police in Yokohama. This same year he joined the Aikikai Honbu dojo.
In 1952, Terada conducted an aikido training seminar for the NKK Company and at 85 different police stations with Gozo Shioda Sensei.
In 1955 he conducted aikido training for the Police Department in Yokohama and at the US Army base, Camp Drake in Saitama. In the same year, along with Gozo Shioda Sensei, he co-founded Yoshinkan Aikido.
From 1967 to 2009, Terada made trips around the world to teach aikido.
In 1990 Terada Sensei received his 9th degree black belt from Gozo Shioda Kancho. At this time he also received the title of Saikō Shihan (Chief or Head Shihan).
He served as the president of the National Yoshinkan Renmei and the president of Aikido Yoshinkan Seiseikai. Terada held the title of Yoshinkan Aikido Saikō Komon. (Yoshinkan Aikido Supreme Advisor). It was announced in January 2008 that Terada had been awarded 10th dan by the Yoshinkan Foundation making him the first to receive such an honor by the Yoshinkan.
On the 13th of July, 2009, Kiyoyuki Terada died at the age of 87.

From 1970-1996, he was employed as a martial arts instructor for the Tokyo Metropolitan Police.
He received his 9th dan from Shioda Gozo in 1992.
In1994 Inoue Sensei was named the new Kancho of the Yoshinkan Aikido.
In 2009 The International Budo Federation awarded him 10th Dan in April 2009.
He was kanchō of Aikido Shinwakan, which he established in 2010.

Tacafumi Taceno was born 9.11.1947 in Yamanashi prefecture. He is Saiko Shihan of the Honbu Dojo. 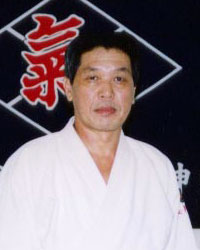 Started Yoshinkan Aikido as uchideshi under GozoShioda in 1968. He’d studied Yoshinkan for 20 yeas. Takeno Sensei was a senior student of Gozo Shioda for long time.
In 1988 he moved in Yamanashi where he founded the Yamanashi one of the branch of Yoshinkan Aikido. He also taught Tokyo police department. In1992 he received the 8th Dan from Kancho Gozo Shioda.
In 2007 he was awarded the 9th Dan and became a principal advisor of Yoshinkan Aikido.
His techniques are dynamic and powerful. He keeping tradition method teaching and also he is a the strictest Sensei in Yoshinkan Aikido. 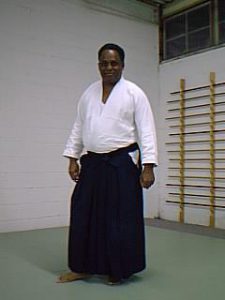 He first came into contact with aikido in 1958 while a member of the US Navy.
Another member of the crew, Signalman Hill, was demonstrating techniques and Amos was shocked at how easily Hill was able control him and others.
In 1962, Amos Parker received his orders to Japan and was deployed to the Yokosuka Naval Base. The Monday after his arrival he found an aikido dojo on base that was under the direction of Yukio Noguchi, 8th dan Yoshinkan Aikido. His training with Noguchi only lasted a couple of months as the latter accepted an invitation to teach aikido in Hawaii. Aikido classes were taken over by Terada Sensei. Amos Parker would spend more the next 30 years training and teaching in Japan.
Amos Parker received his Shihan title in 1986, making him the first non-Japanese instructor to receive such an honor. In 1995, he received the rank of hachidan (8th dan) and in January 2010 he was awarded the rank of 9th dan by the Aikido Yoshinkai Foundation making him the highest ranking non-Japanese Yoshinkan Aikido instructor in the world. 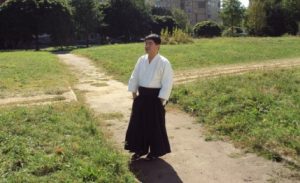 Yasuhisa Shioda started practicing Aikido at the age of thirteen, training every day. As a member of the Yoshinkan Aikido Dojo he continued aikido training with his father the founder of Yoshinkan Gozo Shioda Sensei.
In 2007, he became the new Yoshinkan Kancho, and also the Soke of Yoshinkan Aikido.
In 2012 he left the Yoshinkan organisation in 2014 he founded his own organization, Shioda International Aikido Federation (SIAF), which so far consists of him and his son Masahiro.

Jacques Payet 24.08. 1957. He is a teacher of Yoshinkan Aikido. He was the longest-serving non-Japanese uchideshi Yoshinkan founder Gozo Shioda. He is the 8th Dan, Shihan. 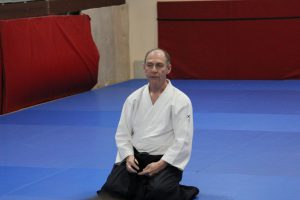 Also he is an instructor at the Yoshinkan Aikido Honbu Dojo and the founder and head instructor of Mugenjuku dojo and the Mugenjuku Kenshusei program in Kyoto.
He is also the originator of the Senshusei Course , a translator of several important works in aikido, and a guest instructor in demand around the world.
Payet was born and grew up in the Saint-Leu in the French region of Reunion island.
While finishing academic studies in France, Payet was practicing jujutsu and attended a seminar in 1978 at which he saw a film of Yoshinkan founder Gozo Shioda.
Determined to meet Shioda, Payet traveled to Japan in September 1980. He arrived without any information about Shioda’s location but was able to find the Yoshinkan dojo with the assistance of a French speaking Japanese student at Tokyo University.
He lived in Japan as a direct disciple of Shioda for two periods, 1980 – 1985 and 1989 – 1993.
As an uchi-deshi, Payet trained 6 hours per day plus time spent providing services for the dojo. He also trained with the Kidotai, Tokyo Metropolitan Riot Police.

Payet Sensei returned to Japan in May 2005, settling in Kyoto as the assistant director of ITEC (Institute for Technology, Enterprise and Competitiveness) at Doshisha University. In Kyoto, Payet initially pursued aikido training on his own without taking on students. However, while training in Doshisha athletic facilities, he attracted the attention of onlookers and eventually began teaching aikido in Kyoto informally in 2007.
In 2008, Payet opened a formal dojo in Kyoto with the assistance Yutaka Kikuchi and Masahiro Nakatsuka. The name of the dojo was originally “Mugenjuku-Kyoto”.
This a short biography was told by Jacques Payet:
“I have started Aikido in Japan at the old honbu dojo in Musashi-Koganei in 1980. When I was studying at University in Lyon , France , during a Jiu-Jitsu and karate seminar I saw an old video of Shioda Gozo and I decided back then that was the art I wanted to study and with this master. At 22 years old I left France and went to Japan, I started as a regular student then after one month my savings were gone so I went to the Honbu to thank my instructors and let them know that I had to go back home because I had run out of money.
I met Shioda Gozo`s son the actual Kancho and he suggested I met his father since I had come from far away and had not seen him yet. He introduced me to his father who asked me * did you really come that far just to Aikido ? do you really like Aikido ? * of course I love Aikido and I came here just to see you and train ! he looked at me and said * if you are courageous , can help wicth various chores at the dojo and train 6 hours a day every day then I`ll give you a chance , you can stay there for free for 3 months . I could not believe my chance and immediatly moved to the Honbu. After 3 months of hard work I was allowed to sty another 3 months m then I joined the police course training with other uchideshi and finally became uchideshi. At the end of 1985 I left the Honbu and went to teach in France , UK and other places in Europe, but I was not satisfied with my Aikido especially training with my old friends in Karate and Ju jitsu I did not feel I could really make the techniques work on them and decided to ask Shioda Gozo if I could go back to Japan to further study with him. I spent another 3 years from 1989 to early 1993 as an uchi deshi again. This time I particularly watch and study Gozo shioda and got very close to him and built up the Aikodo I am doing today. Just before Shioda Gozo died I left for France , then in 2000 I opened 2 dojos in California in the United States ( still in operation) and moved to Kyoto in 2005. I am currently teaching full time at many locations in Kyoto and Osaka japan.”